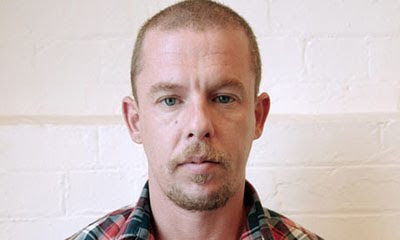 
It feels odd to think that I'll miss someone who I didn't even know existed prior to his death. But, having watched those videos, I will.
Posted by ahclem at 10:58 PM

I wonder if the Whirling Dervishes were part of the inspiration for the robotic/model performance.

I made a point to stop by the Alexander McQueen store on Melrose the other night, which is just a few blocks from me.

The makeshift shrine of candles and piles of roses and lilies was touching, but even more touching was a woman solemnly showing her three daughters pictures of his work in a coffee table fashion book she had brought. The girls ranged from six to 16, and I had the familiar struggle of wondering if it would be ‘fair’ to take a picture. I decided to let them keep their moment, but I desperately hoped that the girls would appreciate having a parent who would understand why Alexander McQueen was so important, a parent who would teach them things like that.

How lovely, how unexpected, to have the same exact desperate hope just a few days later.