From Passive Aggressive Notes, via We Made This, comes an exchange that should provide a chuckle to anyone who has ever had to share a workplace refrigerator. (It's that little orange heart that really makes it for me.) 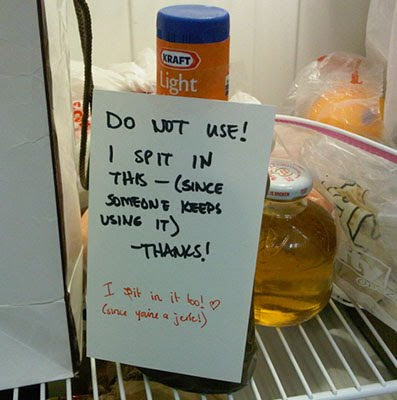 And here we have the essence of American right "populism" encapsulated in a single photo. Sure, it's been around for a while, but you just can't see it too many times. 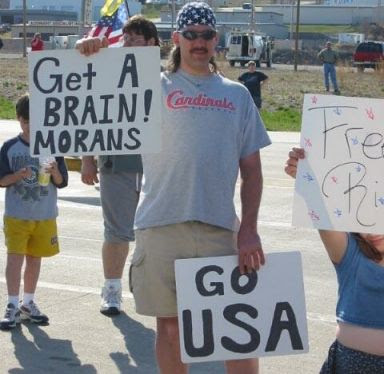 Posted by ahclem at 9:43 PM No comments:

Late last week, an episode of Penn & Teller: Bullshit! focusing on the Catholic Church aired on Showtime. If you're familiar with their shtick, you probably know pretty much what to expect. It's neither the best nor worst example of their work, though their target is richly deserving of all of the contempt and disgust heaped upon it.
Personally, I learned two new things: In 2005, President Bush gave the current pope immunity from being prosecuted for charges that he participated in a conspiracy to cover up the sexual molestation of three boys by a seminarian and to help the seminarian escape prosecution. The second thing I learned is that Italian actress, comedian, political satirist, and performance artist Sabina Guzzanti, who I had never previously heard of, is one kick-ass woman.

If there is one good thing that came of of this episode, it's that that abhorrent fucker Bill Donohue, president of the Catholic League for Religious and Civil Rights (an organization founded on the belief that it's all been downhill since the Inquisition), is in serious danger of having his head explode from apoplectic outrage. This is the man whose nuanced social analysis includes such thought-provoking observations as:

He also was pissed about Reuters reporting that “Irish Priests Beat, Raped Children.” Because while many of them were in fact beaten, forced into essentially slave labor, and kept on the brink of starvation, since they weren't all, you know, actually raped, this was an unfair exaggeration. It's even worse than that brief description makes it sound. You can read about it in more detail at Bitch Ph.D.

So, I'd briefly considered posting the P&T episode here, but frankly, despite agreeing with pretty much everything they present, in the end I just didn't think it was quite brilliant enough (although you're welcome to watch the whole episode here).

While scanning some of the comments over at PZ's place, I came upon a link to the video below. In it, Louis C.K., who was raised Catholic for his first 10 years, visits the Catholic Archdiocese of New York to get some perspective on what Catholicism is really about. It distills into 4 minutes and 40 seconds what P&T couldn't quite as effectively articulate in almost a half hour. (All it's missing is Sabina Guzzanti.)

Posted by ahclem at 6:45 PM No comments:

From Darren Solomon of Science for Girls comes In Bb 2.0, the inspired love child of YouTube and Terry Riley's seminal In C.
Beautiful and mesmerizing (and "interactive").
Posted by ahclem at 9:03 PM No comments: 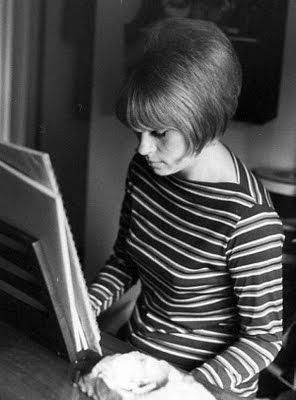 (And speaking of Teddy Kennedy, probably the best remembrance I've read so far is by The Rude Pundit. And it's not even very rude, so check it out.)
Posted by ahclem at 9:35 PM 1 comment: 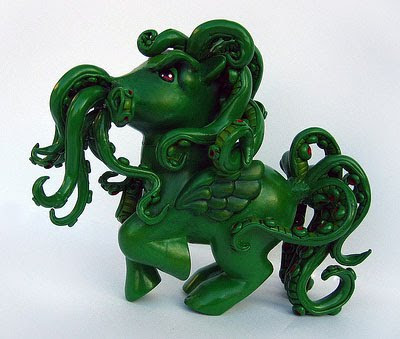 Artist Mari Kasurinen modifies My Little Ponies. In addition to the Great Old One above, she has most of the major Star Wars characters as well as a variety of other pop culture icons. A few more are below. Lots more at her website. 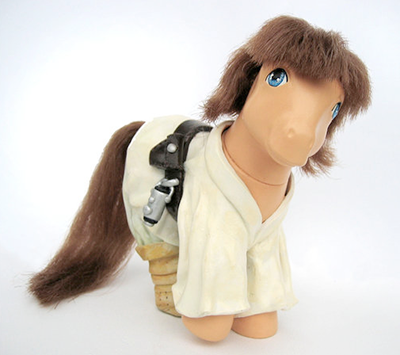 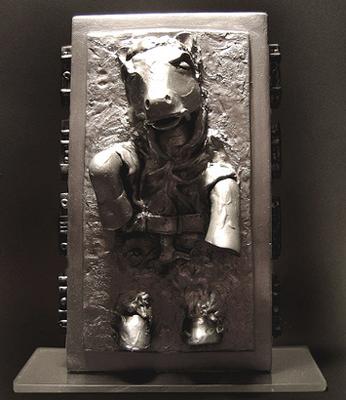 My little Han Solo in Carbonite 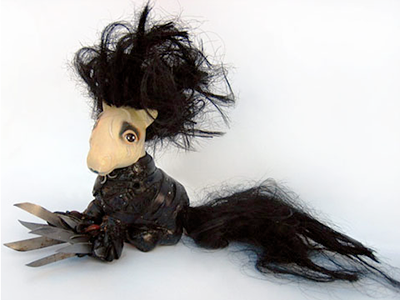 My little Edward Scissorhand
Posted by ahclem at 10:26 PM No comments:

quote of the day (last one for a while, promise)

Atrios, on the confirmation by Tom Ridge in his forthcoming book that the Bush administration manipulated terror alerts for purely political reasons:

And just so it's clear: using the threat of terrorism to try to achieve political goals is, you know, what terrorists do.

Thinking back on those bleak days in the 1930s, when fascism was on the march, the world was hurtling toward war and Adolf Hitler came to power in Germany and instituted the public option.

Posted by ahclem at 2:12 PM No comments:

Michael Vick should have tortured people instead of dogs so Americans could forgive him and look forward.

Via Think Progress, we learn that yesterday, Justice Antonin Scalia, who has a lifetime appoint to the Supreme Court, stated, in reference to the court's decision to consider a claim of innocence in the murder case against Troy Anthony Davis, who has been on death row for almost 20 years, despite the fact that seven of the witnesses against him have recanted their testimony (and other individuals have implicated the prosecution’s key witness against Davis as the shooter):

This Court has never held that the Constitution forbids the execution of a convicted defendant who has had a full and fair trial but is later able to convince a habeas court that he is “actually” innocent. Quite to the contrary, we have repeatedly left that question unresolved, while expressing considerable doubt that any claim based on alleged “actual innocence” is constitutionally cognizable.

Because...well...it's an insect Buddha.
I do rather like the creator's hope that by making a statue of Buddha from their dead bodies, perhaps the insects' souls can rest in peace. Despite what one may think of the likelihood of that, it's still a nice sentiment.
(via Japan Probe)
Posted by ahclem at 7:32 PM No comments:

I realize the posts have been a bit content-light lately, but I've been feeling a bit content-light lately. I had seriously planned something a bit more thoughtful today (being the weekend and all), but who can resist not one, but two stunning clown-oriented works of art. No black velvet, but I think the subject matter more than makes up for that. 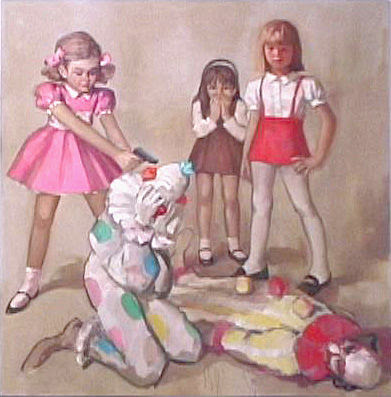 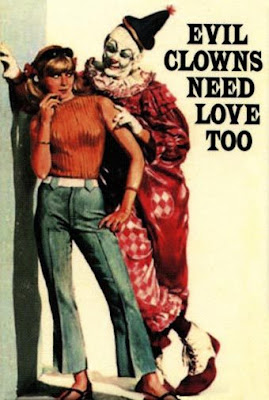 It's the shoes that really make it.
(both via Skull Swap)
Posted by ahclem at 9:08 PM No comments: 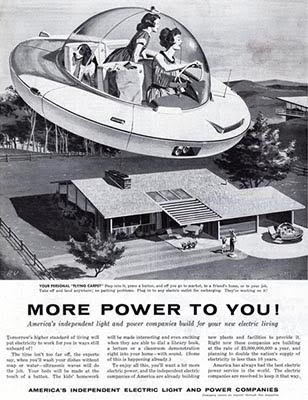 I was never too disappointed about our lack of wearable jet packs, but this looks like it might have been a lot of fun.
(click for a readable version at this isn't happiness)
Posted by ahclem at 9:02 PM No comments: 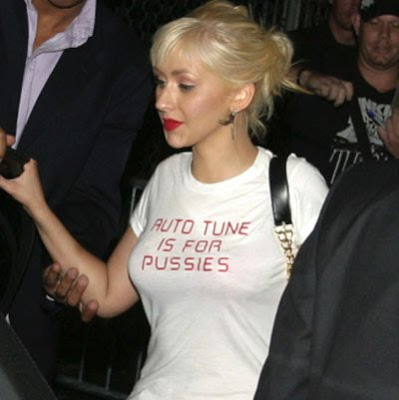 (via just about everywhere)
Posted by ahclem at 12:05 PM 1 comment: 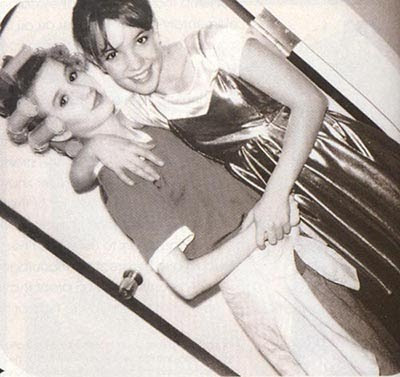 Oh if only Doc Brown and Marty can travel to Orlando and stop this moment from ever happening our world would be totally different.

Posted by ahclem at 9:13 PM No comments:

Confused by the seemingly endless proliferation of cryptic "schools" of art? Well, be confused no more. The crew over at C-Monster have done us all the inestimable service of categorizing all art into two simple-to-understand categories. Simply click the graphic below to get an easily readable version of their invaluable infographic and never feel insecure (about art, anyway) again. 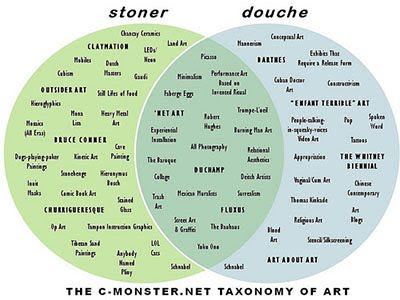 Does this sort of thing actually work? Do enough women respond positively to the promise that buying a product will cause other women to hate them that this is seen as an evergreen messaging theme? It would appear that, for the last 50 years at least, people both inside the advertising industry and those judging the "quality" of the industry's output seem to think the answer is "yes."
Have I mentioned that I'm convinced we're doomed?
(via Retrozone)
Posted by ahclem at 10:20 PM 1 comment: 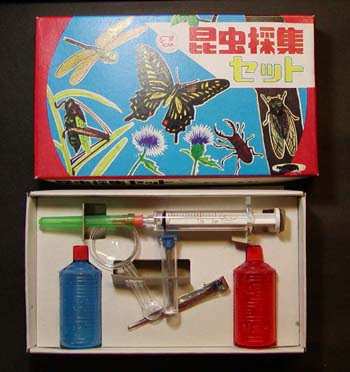 What do you imagine the hypodermic syringe is for? (Maybe extracting deadly venom to use on those annoying younger siblings?)
Posted by ahclem at 3:51 PM No comments:

From Teddy Bear Natural History by Stephanie Metz.
Posted by ahclem at 2:27 PM No comments:

Does anyone else find this just the tiniest bit unsettling? 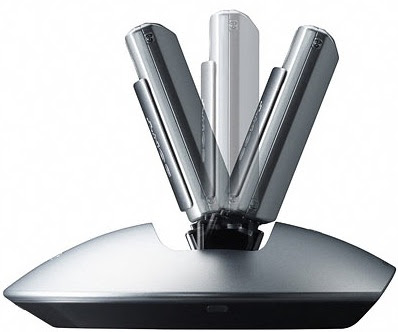 Sony has announced the Party-shot personal photographer, an automated photo-taking cradle. The device uses the DSC-WX1 and DSC-TX1's face- and smile detection functions to detect photo opportunities in social environments. The Party-shot sits on a table or tripod and tilts and pans to locate and follow potential subjects. It will also recompose its shots based on the rule-of-thirds.

And it no doubt comes with a built-in wireless connection to Skynet.
Posted by ahclem at 7:45 PM 2 comments: 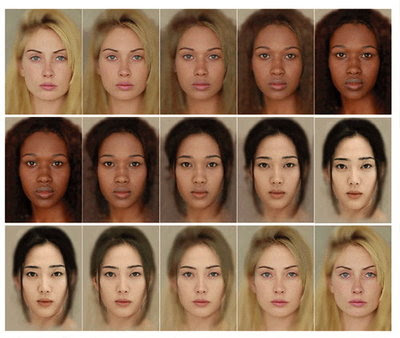