It's unlikely that many people in the USA, unless they're in the Korean or otaku communities, have ever heard of the hugely popular Korean girl group, Girls' Generation. For the purpose of today's lesson, I'm posting one of their first big hits, Gee, from early 2009. It was named song of the decade by the Korean music site, Melon and, at the time I'm posting this, the video has 52,219,736 views on YouTube. (I'd recommend that anyone prone to diabetes limit themselves to no more than the first minute or so of the video.)

One year later, they released the video for their hit, Run Devil Run.
Just sayin'.
Posted by ahclem at 8:45 PM 2 comments:

As documented in this early post, a little less than three years ago Theya, one of our four doggie companions, began to exhibit signs of congestive heart disease. She has been on medications during the intervening years and had, by all appearances (and vet checkups), been doing well on them. This morning, as is my routine, I gave her her morning meds and took her, along with our other three dogs, outside for a bit of a walk before leaving for work.

When I returned this evening, I got her evening meds ready and was surprised that she didn't come running for them (I'm sure you know where this is going). When I didn't find her sleeping in her crate, I got a very bad feeling. Which was borne out when I found her lying dead in the middle of our living room.

Theya's arrival in our family was accompanied by a great deal of drama. And she was not exactly the most mellow of dogs. But she was a sweetheart. We'll miss her. 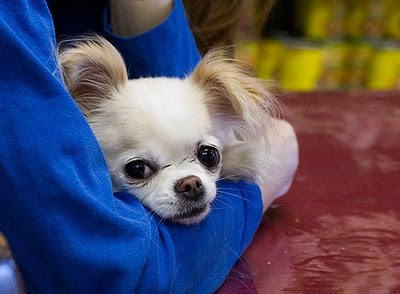