From PZ Myers, upon learning that the Huffington Post's "wellness" editor has a Doctorate in Homeopathic Medicine:

What is a doctorate in homeopathic medicine? A blank piece of paper taped to your wall?

Ok, it's obvious that I'm not plugged into the design world enough (or at all) to know where to go to beg for a FFFFOUND! invitation. So I've started a tumblr blog as a place to collect assorted inspirational, intriguing, or "interesting" imagery of all sorts. You can find it at 404. I'll be updating it regularly, at least for a while (we'll see how long that lasts), so check it out.
Posted by ahclem at 11:08 PM No comments:

This, my friends, is advertising.
(Don't read any of the comments before watching it. Just click play and sit back. And yes, the ad itself is just okay. But the presentation is major win.)
Posted by ahclem at 10:18 PM No comments:

the art of the blurb

Just finished reading David Mitchell's intriguing, but for me, slightly disappointing novel Cloud Atlas. Disappointing both because some years ago I had read and very much enjoyed his first novel, Ghostwritten, (despite it going a bit off the rails at the end), and also because the book arrived with such extravagantly glowing praise from the literary press.
Among the many laudatory blurbs that blanketed the book's back cover, was the following from the august New York Times Book Review:

Wow! I doubt that any writer who was miraculously given the opportunity to secretly ghostwrite his or her own New York Times review quote could come up with anything better than that. I wouldn't be surprised to see that blurb make an appearance on pretty much every Mitchell book from here on out.

After finishing the book, I decided to read some reviews to see if I could gain a bit of insight into why my perception of the book differed as much as it did from that of the ecstatic blurbsters. And it was thus that I found myself reading the very New York Times review from which the above blurb was excerpted. And guess what. It is an almost wholly negative review.

So where did that laudatory quote come from? Here it is in context:

Taken as a whole, ''Cloud Atlas'' seeks to give the novel a steely new rigging of the possible. It is an impressive achievement. Unfortunately, impressive is usually all that it is.

It is a devious writer indeed who writes in such a way that the critic who finds himself unresponsive to the writer's vision feels like a philistine. So let it be said that Mitchell is, clearly, a genius. He writes as though at the helm of some perpetual dream machine, can evidently do anything, and his ambition is written in magma across this novel's every page. But ''Cloud Atlas'' is the sort of book that makes ambition seem slightly suspect.

Note that the "So let it be said that" didn't even rate an ellipsis.
This used to be called quote mining. These days it's generally called journalism.
Posted by ahclem at 5:13 PM No comments:

martinis and bikinis for our friends 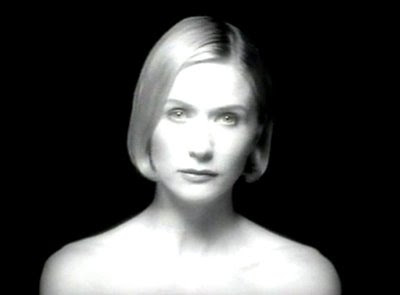 A 57 second antidote to that last one.
Unfortunately, the person who uploaded what is apparently the only copy of this video anywhere disabled embedding, so you're going to have to click the photo of Sam to go to YouTube and watch it. But do.
Really.
Posted by ahclem at 8:44 PM No comments:

disturbing in so many ways

(Click the images below to be more easily disgusted.)

A fascinating project by German photographer Sebastian Kempa. (And yes, those people are obviously not naked. You'll see.)
Posted by ahclem at 9:51 PM No comments:

It just never gets old: 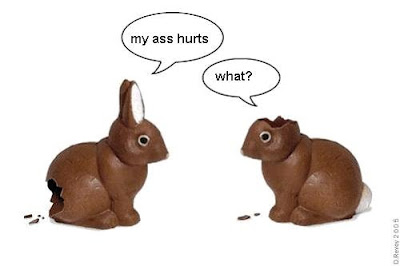 (Bonus advice: You might want to turn Safe Search on before doing a Google image search for "chocolate bunny ass." Just sayin'.)
Posted by ahclem at 1:48 PM No comments:

Here're two tastes that really go better together. You may have heard about the tax day tea-bagging parties that Fox "News" has been promoting for weeks. And you may have already seen this clip from Sex and the City. But put them together, as Jed Lewison over at Daily Kos TV has, and you get comedy gold.

This sort of pathetic cluelessness would be a lot funnier if the people spewing it weren't so infuriatingly successful in dominating our public discourse. (Thanks, mainstream media!). Particulalry when you discover from Think Progress (via Digby) that this supposed grassroots movement is actually engineered, financed, and organized by the lobbyist-run think tanks Americans for Prosperity and Freedom Works (which has even created a number of websites made to look like they were set up by amateurs to promote the protests).

Bonus Cluelessness: The National Organization for Marriage, responsible for this fear-mongering, falsehood-filled anti-gay marriage ad, has inaugurated their "2 Million for Marriage" initiative, or "2M4M" for short. Oops!
Posted by ahclem at 4:19 PM 1 comment: 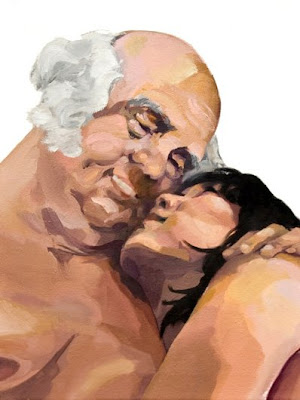 You can see the so far completed works here. They're somewhat more NSFW than the example above, but I think they accomplish, rather delightfully, Ms. Lai's stated goal. I look forward to her further travels toward the present (with a few notable exceptions).
Posted by ahclem at 12:08 AM No comments:

If you don't know what this is referring too, check out this post first.

When you're ready to know the answer, highlight the area below.
It's a device designed to allow women to pee standing up. Single use disposable.
In that context, don't you just love the watering can imagery?
Posted by ahclem at 12:15 AM 3 comments:

I was thinking about doing something on the Obama DOJ's profoundly disappointing continuation of Bush-regime secrecy and immunity policies, along with at least one new, even more extreme, claim of their own, but man, after the last few posts, maybe a break from despair is in order. And anyway, Glenn Greenwald has already handled it superbly (as usual) here, here and here (you know when Obama's lost Olbermann, he's got a problem).

Instead, how about a bit of whimsy? Uniqlo, the Japanese clothing company, creates some of the most delightful web promotions out there. A few years ago, when I first discovered their UNIQLOCK Music.Dance.Clock, I spent more time than I'd like to admit watching it, but it always left me feeling just a little a bit happier than before watching. It changes every now and then. The current version is here, but I still prefer the "Season 2" version, with "Season 4" coming in a close second.

Their most recent creation is called The Tokyo Fashion Map. It takes a while to load, but it's so worth it (and this time without irony). 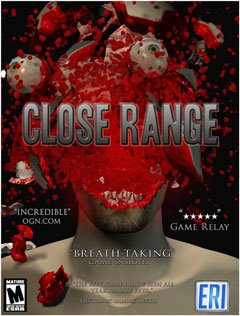 And you can even play an online demo. It takes a while to load, but it's so worth it.

Be sure to play through the whole demo. You won't be disappointed.
Posted by ahclem at 9:40 PM 1 comment:

In the past week, we've seen reports of horrific gun-related crimes at a frequency unusual even for the good ol' firearm-obsessed US of A. Jiverly Wong killing 13 people at civic center in Birmingham, NY. James Harrison shooting and killing his five children, aged 7 to 16 years old, in Graham, WA. Richard Poplawski shooting and killing three police officers (and wounding three others) with an assault rifle in Pittsburgh, PA.

According to Poplawski's best friend, Edward Perkovic, Polawski feared, "the Obama gun ban that's on the way" and "didn't like our rights being infringed upon."

Obama gun ban? Where could he have gotten that idea?

(In case you were wondering, that is an official NRA site.)
Of course, we can always count of our courageous media to set us straight. According to Fox "News" "commentator" (and yes, each deserves it's own scare quotes) Glenn Beck:

In February, the FBI reported that requests for background checks for firearm purchases increased to 1,259,078, up 23.3% from the same month a year ago. And that's dwarfed by the record 1,529,635 reported in November 2008, an astonishing 42% jump over the previous November. In many communities across the country, gun dealers report that they simply can't keep up with the demand

I guess that in the midst of this economic disaster, it's good to know there is at least one segment of the economy that's not only surviving, but booming.
I know that sure makes me feel safer.
Posted by ahclem at 4:46 PM No comments:

So, can anybody (who doesn't read Japanese) guess from the ad to the left what the product being advertised is?
Posted by ahclem at 5:10 PM 5 comments:
Newer Posts Older Posts Home
Subscribe to: Posts (Atom)