Get out the popcorn, it's Tuesday night (well, actually early Wednesday morning) at the movies. And it's a double feature.
First up is a short animated film by the Japanese artist Akino Kondoh. The title roughly translates as It Might Be a Train.
And then, from closer to home, comes Sweet Wishes, by the American artists Mark Ryden and Marion Peck.
Posted by ahclem at 12:17 AM 1 comment: 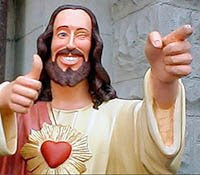 I've been intending for a while now to go off on the odious Rick Warren at the inauguration issue, but since about a zillion others have covered it about as well as it can be covered, I think I'll take a pass (apart from pointing out that as much as I respect Melissa Etheridge, she has clearly demonstrated that being gay and being gullible are not mutually exclusive).
Instead, here's Sia Furler's perfomance of her song, Soon We'll Be Found, from a recent David Letterman Show. (You can, if desired, jump ahead to 00:35 to skip gratuitous Letterman shtick.)
More Sia in a future post.
Posted by ahclem at 11:09 PM No comments:

the long tail: maybe not so long after all

As reported by the Times Online (UK), a new study by Will Page, chief economist of the MCPS-PRS Alliance, a not-for-profit royalty collection society, suggests that Chris Anderson's Long Tail principle as applied to internet music distribution may not be quite the revolutionary new business paradigm that Anderson proposes.
Mr. Anderson's thesis is that catering to niche markets is the road to success for internet sellers. Subtitles to his book include, How Endless Choice is Creating Unlimited Demand and Why the Future of Business is Selling Less of More. (Have you ever noticed how often the subtitles to business strategy books obviate the need to actually read the book?)
Mr. Page and his co-researcher Andrew Bud found that, for music at least, the niche market is not, in fact, a business bonanza and that internet sales success still largely relies on big hits. Most dramatically, they found that, of the 1.23 million(!) albums available online, only 173,000 were ever purchased, meaning that fully 85 per cent did not sell a single copy all year.
According to Mr. Bud:

“I think people believed in a fat, fertile long tail because they wanted it to be true...”

Gosh, that's never happened with a claimed "Revolutionary New Paradigm of Business Success!" before.
Oh, wait. Yes it has.
Posted by ahclem at 4:44 PM No comments:

room at the inn 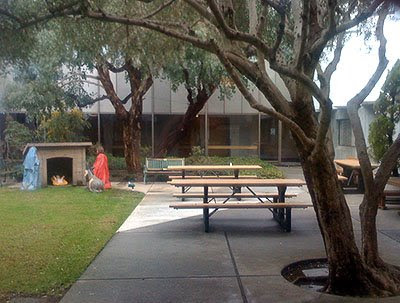 During the last four days, I've probably walked by this scene (shot with my phone cam though a corridor window) at least 25 times. And every time, the only thing I could think about was where life-size Joseph, Mary, little baby Jesus, and the ass were stored the other eleven months of the year. I would imagine Mary and Joseph kneeling in rapt adoration in a dark closet. The ass propped up on its (resist!) tail against a wall. Jesus placed carefully on a stack of surplus paper goods.
I am most definitely not a religious person, but even so, it made me kind of sad.
Posted by ahclem at 10:06 PM 1 comment: 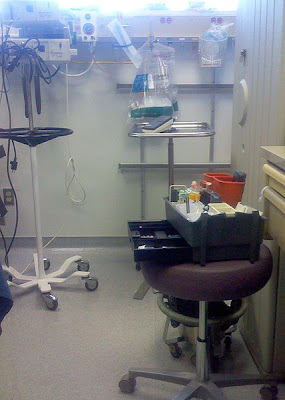 One of the cool things about the internet is that there seems to be an almost never-ending supply of intriguing micro-worlds to discover.

Just this week stumbled across the web site of a company called theory11. They basically produce tutorial videos that teach magic tricks and card manipulation ("flourishing"). They provide the typical Web 2.0 community features and seem designed to project a vaguely urban/underground vibe.

They also produce promo videos for their products that are rather entertaining in their own right. Here are a few: 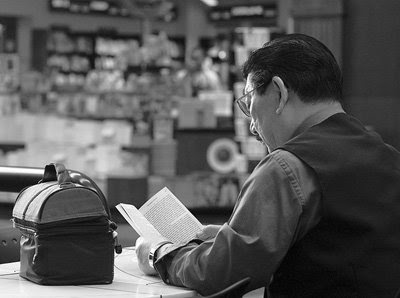 How long do you imagine it will be before kids look at this and wonder how he got such a long text message?
Posted by ahclem at 9:05 PM No comments:

From The Museum of Jurassic Technology, we learn that:

The practice of telling the bees of important events in the lives of the family has been a widely observed practice for hundreds of years. Although it varies somewhat among peoples, it is invariably a most elaborate ceremonial. The procedure is that as soon as a member of the family has breathed his or her last breath, a younger member of the household (often a child) is told to visit the hives, rattle a chain of small keys, tap on the hive and whisper three times:

A piece of funeral crepe is then tied to the hive and after a period of time funeral sweets are brought to the hives for the bees to feed upon. The bees are then invariably invited to the funeral and have on a number of recorded occasions seen fit to attend.

Continuing the recent advertising theme, this ad for Orangina, entitled "Naturally Juicy," has ended up on various Year's Best and (mostly) Year's Worst ad lists.
Personally, despite liking Orangina, after watching the ad, the thought of actually ingesting the stuff leaves me a bit queasy.

Posted by ahclem at 5:16 PM No comments:

Posted by ahclem at 9:03 PM No comments:

I'm thinking that those last two posts really fucked up the blog's graphic language.
Content or style?
Posted by ahclem at 2:56 PM 2 comments: 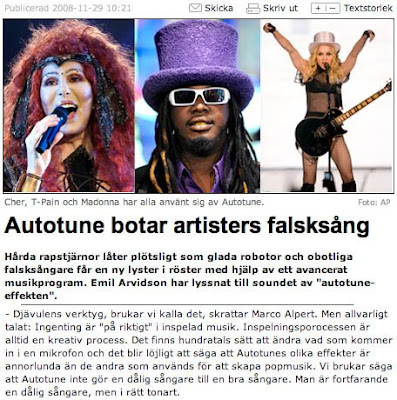 I only regret that Ingmar Bergman didn't live to see this day.
Posted by ahclem at 1:59 PM No comments:

i guess it depends on how you define "advertising"

From an email received today: 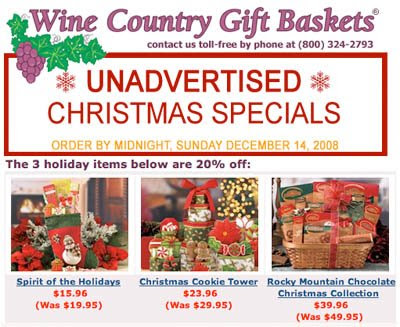 And yes, the subject line was, "Unadvertised Christmas Specials."
Posted by ahclem at 1:33 PM No comments: 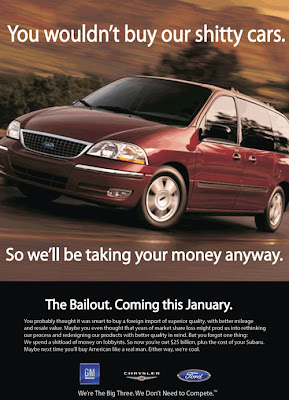 (Don't know who to credit, but via Brand Mix)
Posted by ahclem at 9:00 PM No comments:

What's a Girl To Do?

Hey, if you can't post a picture of your grandchild to your own blog, what's the point? 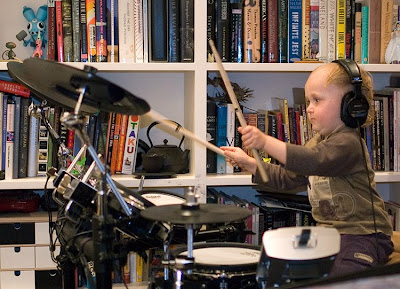 Posted by ahclem at 6:24 PM No comments: 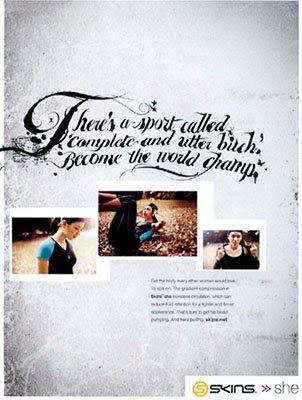 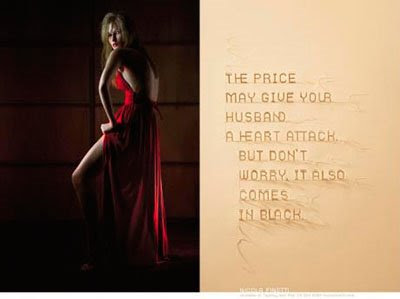 This year's panel of judges was made up of eight members.
Three of them were women.
Posted by ahclem at 9:25 PM 1 comment: 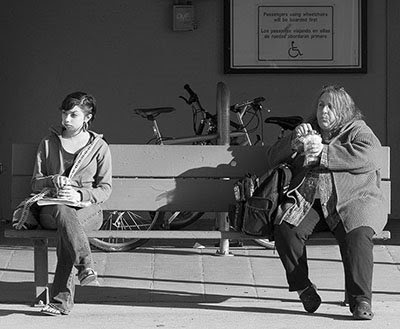 (Blogger's doing something weird with photos. Click for the full-size version.)
Posted by ahclem at 2:31 PM 2 comments:

Over the last few years there's been a boomlet in people photographing real landscapes and cityscapes using artificially shallow depth of field (usually via tilt lenses or post-processing in Photoshop), with the uncanny result that the photos appear to be of models (as in model railroad layouts) rather than the real world.

Australian photographer Keith Loutit has rather delightfully extended the technique to moving images.

God, I would have loved to have been at the Mattel product planning meeting where it was decided that they were actually going to make this. 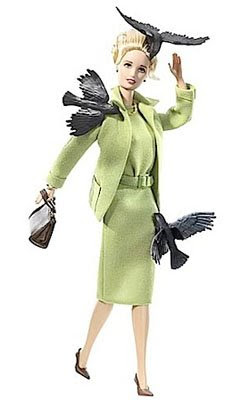 keeping the art in 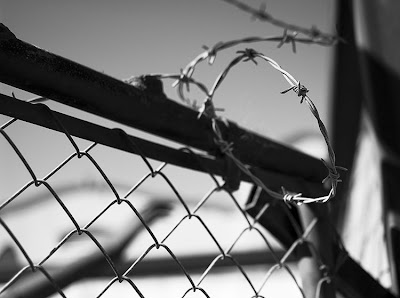 Now admittedly, it's hugely tempting to simply end the post here and stand back and watch as each reader's hypocrisy meter goes critical and explodes into a million little pieces.

But that would be doing the details a disservice.

Per the press release, the award, presented on World AIDS Day, was given to President Bush in recognition of his "unprecedented contribution to the fight against HIV/AIDS."

According to Warren, “No U.S. president or political leader has done more for global health than this Administration."

Specifically, he is being honored for the PEPFAR program, i.e, the President's Emergency Plan for AIDS Relief. This is the program that stipulates that 2/3 of funds allocated to behavioral prevention programs must go to abstinence-only/faithful-after-marriage programs (despite the fact that virtually every study has shown that such programs are essentially ineffective). Even if your program promotes abstinence and faithfulness, but also the efficacy of condoms in preventing HIV/AIDS, well sorry, you don't get any of that 2/3. The remaining 1/3 can go to condom programs, but only if those programs don't promote condoms to young people. Because everyone knows how effective selling abstinence to teenagers is.

So, what Bush is really being honored for is his unprecedented contribution to the religious right's Holy War on Fucking™.

And as a bonus, again from the press release, the award is "for outstanding contribution toward alleviating the five global giants recognized by the Coalition, including pandemic diseases, extreme poverty, illiteracy, self-centered leadership and spiritual emptiness."

Doesn't Bush personally embody at least three of the five global giants all by himself?