Recently, the computer game The Sims 3 was released on a variety of platforms. The third (duh!) generation of the Sims franchise, itself an extension of the venerable Sim City series, it lets you create virtual characters by assigning them a variety of personality traits and life goals. You then attempt to guide them successfully though their lives.

I've always been interested in games, computer and otherwise, and tried one of the earlier incarnations of The Sims. I hated it. In order to maintain a good attitude, you have to make sure your Sim eats, sleeps, bathes, and goes to the bathroom (among other things) and, at least when I played it, it seemed that I could never keep up with my Sim's basic needs. I know millions of fans disagree, but to me it just seemed more like work than a game.

So, with that as context, this is pretty fascinating: 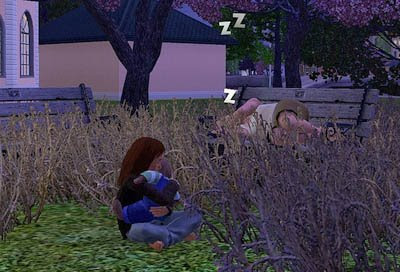 Robin Burkinshaw, a UK games design student, has created two Sims, Alice and Kev, and is describing their Sim life on her blog. Kev is Alice's father. He's crazy. And they are homeless.

According to Robin's introduction:

This is an experiment in playing a homeless family in The Sims 3. I created two Sims, moved them in to a place made to look like an abandoned park, removed all of their remaining money, and then attempted to help them survive without taking any job promotions or easy cash routes. [...]
I have attempted to tell my experiences with the minimum of embellishment. Everything I describe in here is something that happened in the game. What’s more, a surprising amount of the interesting things in this story were generated by just letting go and watching the Sims’ free will and personality traits take over.

The story starts here. As I post this, it is still ongoing.

A warning. It's not all fun and games.
(via Wonderland)
Posted by ahclem at 11:08 PM