"we came in peace for all mankind"

As anyone who has been exposed to practically any news media lately has been reminded, 40 years ago tomorrow the first humans set foot on another world (loony conspiracy theories aside). There have been a lot of awesome photos of the Apollo 11 mission appearing around the web, and we're all (at least those of us old enough to remember) familiar with the blurry video of the first moon walk. But personally, the most inspiring Apollo 11 photo I've seen is this one, taken just a few days ago by the NASA Lunar Reconnaissance Orbiter Camera (LROC): 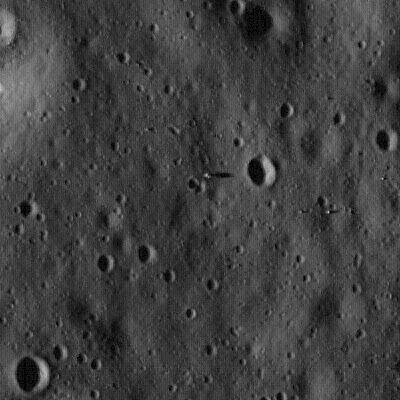 See that little white dot just above the center of the photo? The one with the thin straight shadow extending to its right? That's the Apollo 11 Lunar Descent Module. Sitting on the moon's surface exactly where it has been since 1969.

The LROC is imaging each of the Apollo landing sites, and thanks to particularly advantageous lighting conditions, its photo of the Apollo 14 site resulted in a number of additional details. As the labeled photo below shows, not only can we see the Apollo Lunar Surface Experiment Package that was placed at some distance from the Lunar Module, but the trail left by the astronauts' footprints as they walked back and forth from the module to the experiment package over 38 years ago. 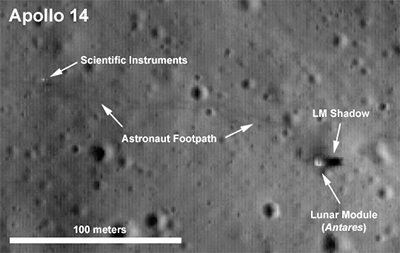 How fucking amazing is that?
Posted by ahclem at 5:20 PM