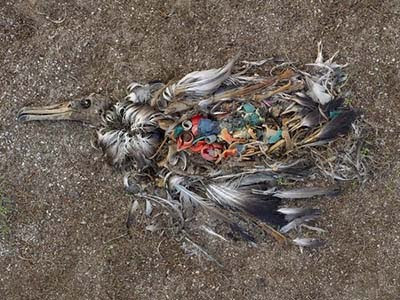 This photograph is from Midway - Message from the Gyre, a series of photographs by Chris Jordon of dead albatross chicks on Midway Atoll. To quote from the introduction:

“These photographs of albatross chicks were made just a few weeks ago on Midway Atoll, a tiny stretch of sand and coral near the middle of the North Pacific. The nesting babies are fed bellies-full of plastic by their parents, who soar out over the vast polluted ocean collecting what looks to them like food to bring back to their young. On this diet of human trash, every year tens of thousands of albatross chicks die on Midway from starvation, toxicity, and choking.
To document this phenomenon as faithfully as possible, not a single piece of plastic in any of these photographs was moved, placed, manipulated, arranged, or altered in any way. These images depict the actual stomach contents of baby birds in one of the world’s most remote marine sanctuaries, more than 2000 miles from the nearest continent.”

Follow the link above. Look at the pictures.
Posted by ahclem at 10:12 PM