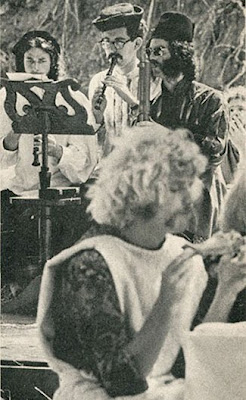 This photo by Baron Wolman (rendered sepia by the passing of time) was taken on June 5, 1970 at the wedding of Theresa St. Clair and Jack Rumbaugh in a canyon north of Malibu, California. It appears in a photo story about the wedding in the August, 1970 issue of Rags, a "counter-culture" fashion magazine that was published in San Francisco from mid-1970 to mid-1971. Brilliant San Francisco Chronicle columnist Jon Carroll was a writer for and later editor of Rags. The artist Barbara Kruger is listed on the masthead as one of its art directors.

While I doubt that it's necessary for anyone who knows me in real life, for the benefit of internet friends I'll point out that that's me in the middle, playing soprano recorder. To my left is Charles Fischer, the founder of the consort. I'm sad to say that I no longer remember the name of our then-third member.
Thanks to Cassandra Tondro's blog, Rags Lives!, you can see the entire article here.

That same issue also includes an article about the Hamilton Pulsar, described as "the first solid state portable wrist computer in the world." The Pulsar was actually an LED digital watch (the kind where, for battery life reasons, you could only read the time by pressing a tiny button which would light up the display for 1 1/4 seconds). It cost $1500.

And oh yeah, The Cockettes.
Posted by ahclem at 8:31 PM

The Pulsar! I remember that!
Nice hat.