As I wrote yesterday's post, it had been my intention to write today about the sad (and sadly ironic) circumstances leading up to Sam Haskin's death. But on second or third (or at least subsequent) thought, I've decided instead to simply post another Haskins photo, this one an apparently unused shot from the sessions for his 1962 book Five Girls. It just seems like a better thing to do.

(Photos in this and the previous post © Sam Haskins)
Posted by ahclem at 9:16 PM No comments: 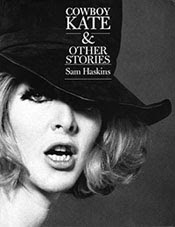 I read last night that the photographer Sam Haskins died last week at the age of 83. I discovered his work back when I'd just entered college and was absolutely in awe of it. Sure, it didn't hurt that it was full of naked young women, but his sense of design, his stunning use of high contrast black and white printing and purposeful graininess, and his layouts combining multiple images (a quarter century before the advent of Photoshop), continue to influnce photographers and art directors to this day.

Maybe more tomorrow, but in the meantime, here are a couple of spreads from his hugely influential book Cowboy Kate & Other Stories from 1965. 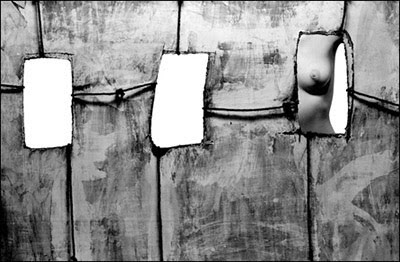 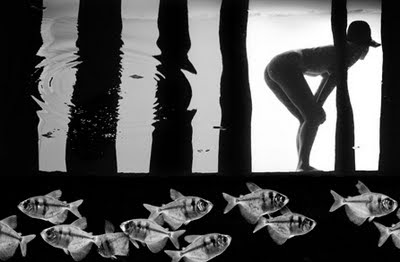 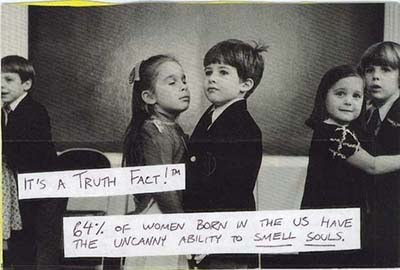 Video for Porstishead by Chris Cunningham (who you may or may not remember from Rubber Johnny).

If you like (or as in my case, love) Portishead and have not yet watched the DVD of their 1997 concert (with full orchestra) at Roseland in New York, track it down (Netflix has it), and watch it immediately. That's an order.
Posted by ahclem at 8:30 PM 2 comments:

I haven't actually planned one, but it seems to be what's happening.

Please stand by.
Posted by ahclem at 7:29 PM No comments:

This would be a lot more amusing if it weren't so astonishing sad.
(via skippy the bush kangaroo)
Posted by ahclem at 9:24 PM No comments:

I don't even particularly like Godiva chocolate, but this is wonderful. 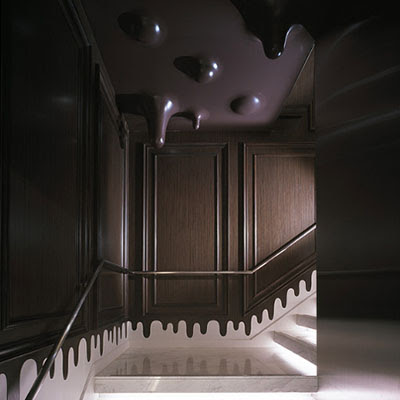 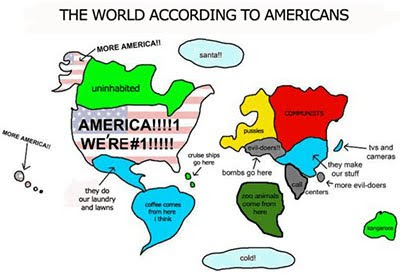 (Via digby. Click the image for a more readable version.)
Posted by ahclem at 5:19 PM No comments: 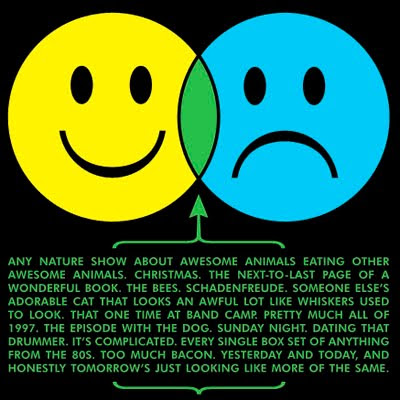 (Available as a T-shirt at the Diesel Sweeties Store.)
Posted by ahclem at 9:07 PM No comments:

From Buzzfeed's compendium of 35 amazing science fair projects comes this most amazingest one. 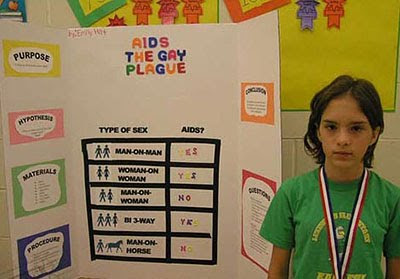 Man, what I would give to be able to read the "Materials" and "Procedure" sheets. (I'm particularly interested in the methodology that resulted in that Man-On-Horse data.)
Posted by ahclem at 3:59 PM No comments:

And here, as promised, is Terri Timely's video for St. Vincent's Marrow.


And what the heck, their borderline disturbing video for St. Vincent's Actor Out of Work


If you like these as much as I do, you might want to watch the much better quality versions on the Terri Timely web site:

Marrow
Actor Out of Work
Posted by ahclem at 9:54 PM No comments:

Terri Timely is the directing team of Ian Kibbey and Corey Creasy. As rather bizarre coincidence would have it, I had been planning to post a particular music video today, but when I encountered the absolutely delightful commercial below over on Notcot, I decided to post it instead. It was only in doing a little research on Terri Timely that I discovered that they were also the directors of the music video I'd planned to post.

Anyway, here's The Office of Eden. 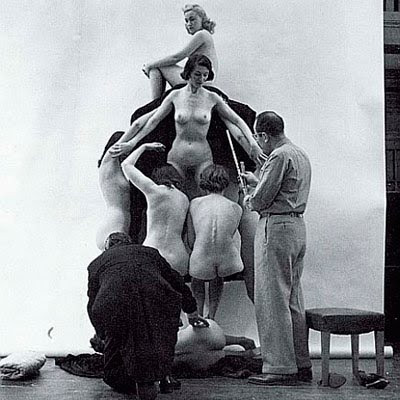 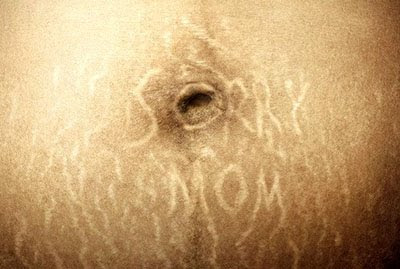 (from dockera.com via ffffound)
Posted by ahclem at 9:24 PM No comments:

In Focus: Senate Ethics Committee To Meet In New Ethics Committee Mansion
You can read the whole story here. But honestly, the headline says it all.
Posted by ahclem at 6:06 PM No comments:

From The Financial Times, we learn that Halcyon, the production company behind Terminator Salvation and the current owner of the rights to future exploitation of the franchise, recently filed for Chapter 11 bankruptcy and plans to auction the rights later this month. Learning of this, Joss Whedon offered this open letter to Halcyon:

An Open Letter to the Terminator Owners. From a Very Important Hollywood Mogul

I am Joss Whedon, the mastermind behind Titan A.E., Parenthood (not the movie) (or the new series) (or the one where 'hood' was capitalized 'cause it was a pun), and myriad other legendary tales. I have heard through the 'grapevine' that the Terminator franchise is for sale, and I am prepared to make a pre-emptive bid RIGHT NOW to wrap this dealio up. This is not a joke, this is not a scam, this is not available on TV. I will write a check TODAY for $10,000, and viola! Terminator off your hands.

No, you didn't miscount. That's four — FOUR! — zeroes after that one. That's to show you I mean business. And I mean show business. Nikki Finke says the Terminator concept is played. Well, here's what I have to say to Nikki Finke: you are a fine journalist and please don't ever notice me. The Terminator story is as formative and important in our culture — and my pretend play — as any I can think of. It's far from over. And before you Terminator-Owners (I have trouble remembering names) rush to cash that sweet cheque, let me give you a taste of what I could do with that franchise:

1) Terminator... of the Rings! Yeah, what if he time-travelled TOO far... back to when there was dragons and wizards? (I think it was the Dark Ages.) Hasta La Vista, Boramir! Cool, huh? "Now you gonna be Gandalf the Red!" RRRRIP! But then he totally helps, because he's a cyborg and he doesn't give a s#&% about the ring — it has no power over him! And he can carry it AND Frodo AND Sam AND f@%& up some orcs while he's doing it. This stuff just comes to me. I mean it. (I will also offer $10,000 for the Lord of the Rings franchise).

4) Christian Bale's John Connor will get a throat lozenge. This will also help his Batwork (ten grand for that franchise too, btw.)

6) The movies will stop getting less cool.

Okay. There's more — this brain don't quit! (though it has occasionally been fired) — but I think you get my drift. I really believe the Terminator franchise has only begun to plumb the depths of questioning the human condition during awesome stunts, and I'd like to shepherd it through the next phase. The money is there, but more importantly, the heart is there. But more importantly, money. Think about it. End this bloody bidding war before it begins, and put the Terminator in the hands of someone who watched the first one more than any other movie in college, including "Song of Norway" (no current franchise offer).

I'm not sure that this would be quite as cool as another season of Firefly (and I'm kind of disappointed about the "no musical" thing), but it's bound to be better than pretty much anything anyone else reported to be in the running would come up with. So, to Halcyon I say, it looks to me like an offer you can't (or, at least, shouldn't) refuse.
Posted by ahclem at 8:15 PM No comments:

who could have ever guessed...

From a McClatchy story headlined, "How Goldman secretly bet on the U.S. housing crash":

WASHINGTON — In 2006 and 2007, Goldman Sachs Group peddled more than $40 billion in securities backed by at least 200,000 risky home mortgages, but never told the buyers it was secretly betting that a sharp drop in U.S. housing prices would send the value of those securities plummeting.

Goldman's sales and its clandestine wagers, completed at the brink of the housing market meltdown, enabled the nation's premier investment bank to pass most of its potential losses to others before a flood of mortgage defaults staggered the U.S. and global economies.

You should read the whole story, but if you just can't quite find the time, this, from later in the article, should serve as an effective summary (emphasis mine):

McClatchy's inquiry found that Goldman Sachs:
The firm benefited when Paulson elected not to save rival Lehman Brothers from collapse, and when he organized a massive rescue of tottering global insurer American International Group while in constant telephone contact with Goldman chief Blankfein. With the Federal Reserve Board's blessing, AIG later used $12.9 billion in taxpayers' dollars to pay off every penny it owed Goldman.

These decisions preserved billions of dollars in value for Goldman's executives and shareholders. For example, Blankfein held 1.6 million shares in the company in September 2008, and he could have lost more than $150 million if his firm had gone bankrupt.

With the help of more than $23 billion in direct and indirect federal aid, Goldman appears to have emerged intact from the economic implosion, limiting its subprime losses to $1.5 billion. By repaying $10 billion in direct federal bailout money — a 23 percent taxpayer return that exceeded federal officials' demand — the firm has escaped tough federal limits on 2009 bonuses to executives of firms that received bailout money.

Goldman announced record earnings in July, and the firm is on course to surpass $50 billion in revenue in 2009 and to pay its employees more than $20 billion in year-end bonuses.

That $20 billion in year-end bonuses? You (and I) quite literally helped pay for that. And not symbolically. Actual dollars you paid as taxes are ending up as bonuses for those Goldman execs.
Maybe it would feel better to think of it as part of the holiday season's spirit of giving.
I know it's becoming something of a tiresome mantra here, but these are the people who own our government (and, by extension, our country). It's getting to the point where they're not even bothering to try to hide it. Keep that in mind when we eventually see what health care "reform" will actually consist of.
Posted by ahclem at 2:03 PM No comments:
Newer Posts Older Posts Home
Subscribe to: Posts (Atom)