Well, from the guesses in the comments (and some discussion around the citizen household), it appears that many readers (and by "many" I mean "approximately two") assumed that the subject of the "who's this?" question in the previous post was the young woman in the photo. Hell, I have no idea who she is. The question was about the young cow. 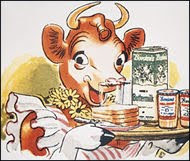 Since I obviously messed up by not making that clearer, I'm just going to go ahead and tell you that that's the cow who went on to become Elsie, the symbol of Borden dairy products. Many people assume that Elsie was simply made up by some ad agency, but she was an actual cow, born at the Elmhill Farm in Brookfield, Massachusetts in 1932. Seriously, you can read all about her here.

Nah, I'm just fucking with you.* Of course it's about the young woman. And I will stipulate that the correct answer may be among the three guesses already submitted in the comments by Ms. Erin O'Brien (no doubt from the supportive comfort of her newly acquired Steelcase Sensor desk chair). As such, let's give Ms. O'Brien a day or so to return and select her final one answer. And, of course, everyone else is still encouraged to join in the fun.
* This is what is known as "foreshadowing." Unfortunately, at the time I'm posting this, the post that this foreshadows hasn't been written yet. So check back in a day or so for the big foreshadowed payoff.
Posted by ahclem at 3:38 PM

Isn't that illegal in your state?

It's like they say in the NASCAR pits, it ain't cheatin' if you don't get caught ... and diddling yourself ain't illegal if you only do it when you're alone.