When one Tony Alleyne of Hinckley, Leicestershire (UK) had his wife leave him in the late 90s, he responded by taking the opportunity to remodel his 500 square foot apartment. The remodel, which he executed himself, took 5 years to complete. It is described as featuring "voice-activated lighting, LED lighting, running lights, air-conditioning - but no bed." Apparently Mr. Alleyne suffered from sciatica and had been advised by his doctor to try sleeping on the floor. According to Mr. Alleyne, "It cured the sciatica and gave me the opportunity to convert the bed area into the Transporter area. Bed space is overrated" 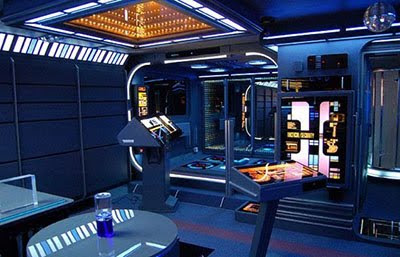 (Is it my imagination, or is that disco ball seriously non-canonical?)
Posted by ahclem at 9:35 PM