Back on 12/31, I made a rather half-hearted attempt to do a New Year's Eve-themed posting over on 404. Included among the images was the picture below by the American illustrator Amos Sewell (on the admittedly marginal premise that New Year's Eve is traditionally about parties and it looks like these folks are off to a party). 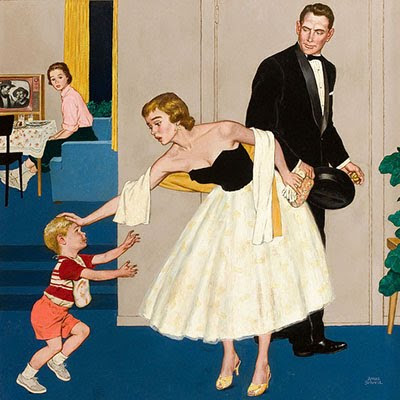 (Via ondiraiduveau's prodigious flickr collection of (mostly) 20th Century popular illustration.)
At first glance, this looks like the sort of amusing family tableau that one might have expected to see on the cover of the Saturday Evening Post* mid-last century (note the B&W TV). Attractive couple, dressed to the nines, leaving for a party, as their young son, about to be left with a babysitter or older sister, his hands covered in food, rushes to give his mother a goodbye hug.

Maybe. But the more I look at this picture, the more I find myself imagining less benign scenarios.

What do we see?
I don't know about you, but to me this looks less like a charming family vignette and more like an illustration for some not-yet-at-the-time-written (but deeply depressing) Edward Albee play.
_________
* After having written this, but before posting, I went looking for a link to more info about Amos Sewell. And what do you know? This illustration did, in fact, appear on the cover of the Saturday Evening Post of September 27, 1957 (the year before Edward Albee wrote his first play). How subversive of them.

** It's hard to imagine that I'd ever actually write a phrase like "darker currents that swirl ominously beneath the family's stylish exterior." But there you go. (Luckily, I don't believe in an afterlife, so the fear of an eternity in hell is not a concern.)
Posted by ahclem at 5:01 PM

Bulwer Lytton thanks you.

Better hell than the suburbs.