omg, i was there 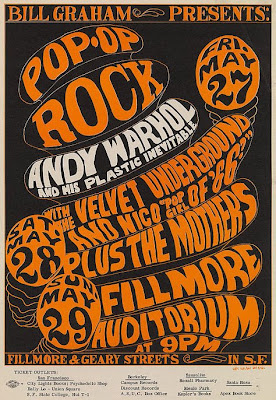 The most astonishing thing about finding this poster online is the realization that I'd forgotten about The Mothers. This was the first "psychedelic"-style rock concert I'd ever gone to and I'd always thought I'd retained a pretty clear memory of it (the light show, multiple Warhol films projected on the walls, the Velvet Underground closing the night by leaning a guitar up against an amp and walking out as the feedback continued to screech, and, of course, Nico), but not the slightest memory that The Mothers were there.
The funny thing is that in later years, I pretty much idolized Zappa. I spent a delightful evening with him in 1981 at his house up off Mulholand Drive giving him a private demonstration the then-new E-mu Emulator (it wasn't hi-fi enough for him, he ended up buying a Synclavier). He introduced me to his wife and daughter (Moon Unit - we sampled her voice into the Emulator and ended up using it as a demo for years), and played me tapes of an upcoming album (back when they were really "albums"). A truly memorable experience.
Up until tonight, I've always regretted that I never got to see him perform in person. I guess I'm glad I did, but I'm thinking it would have been better to actually remember it.
(And it was actually "Andy Warhol and his Exploding Plastic Inevitable.")
Posted by ahclem at 11:03 PM

I saw Zappa play in 1984, three days after my 10th birthday, at what was then called The Bismarck Theatre in Chicago. I had forgotten. Thank you.