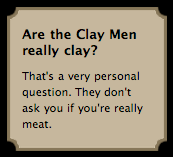 And if there aren't any posts here for a while, you'll know why.
Posted by ahclem at 9:35 PM